Why the Wave of Waste Dress?

After doing all the interviews for other organisations about the “wave of waste” dress I thought I’ll finally let you know what this project meant to me and how it all began. 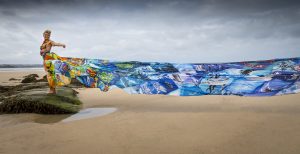 In 2016 I saw an image of a wall made from dumped surfboards from Devon and Cornwall rescued by Beach Care. It was shocking to find out that 14,000 are dumped in just those beaches every year, tragically even more drifting off to sea. They begin their journey 11,000 miles away in China. Cheap polystyrene boards covered in colourful fabric that are literally rubbish. It is all plastic and the polystyrene core notably breaks down into deadly microplastic all too easily.  They snap and rarely last one holiday let alone years. What could I do?

I wanted to make something striking that would grab attention.  As I am an eco fashion designer it made sense that it would be a dress…

How I created the Wave of Waste dress

I started sketching and consequently got in touch with Beach Care to see what we could do together. Little did I know it was going to involve 100 discarded bodyboards and become 22 metres long. My son was integral to the process, both helping strip the covers off the snapped boards and helping me lay them all out across our house to colour coordinate the order for the dress. 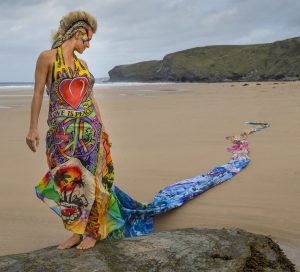 The designs are made to lure children in, and even as I carried a “snapper” that was already bent in two a young boy said to his mummy “that’s what I want, one just like that”. I of course stopped to educate the family but it shows how tempting these designs are for children. Some of them are offensive too due to sexist images. Bodyboards aimed at girls where the eyes are drawn larger than their waists are not helpful for positive body image. Spending so much time with the boards we really came to dislike not only what they do to the ocean and marine animals but also their designs. I had to make this noticeable and it just got longer and longer. In the end it reached from the top of the house, down all the stairs and out the back door!

I was rather lucky in who joined us for the wave of waste dress press launch.  It was incredibly important that the hair and make up would echo my environmental ethos and to top it all off Emma Adams, ex pro surfer, agreed to model it for us. When we arrived the night before for the press launch I walked down to the beach to let Rebecca the make up artist know all about 2 minute beachcleans. It was not a good day for the beach: a dead bird, microplastic and larger pieces while metres of polythene floated in the sea. Tears poured down our faces whilst we tried to make a difference. After more than an hour it was barely visible where we had been. We really knew why we were there.

The key message: buy better from a surf shop and get a board that is safer, rides better and will last, (or hire one) and it will be better for both yourselves and the environment. I have a board that is still going strong after 20 years. Yes, it cost more than a tenner but it is still incredibly good value for money.

We can make a difference so that no one has to surf or swim a wave of waste in the future. 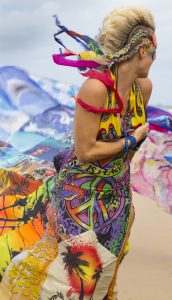 The Eco A Team

Board collecting and organisation: Beach Care of Keep Britain Tidy